The City Luminous: Electric Salome and other works by Kerry Laitala with live sound by Voicehandler 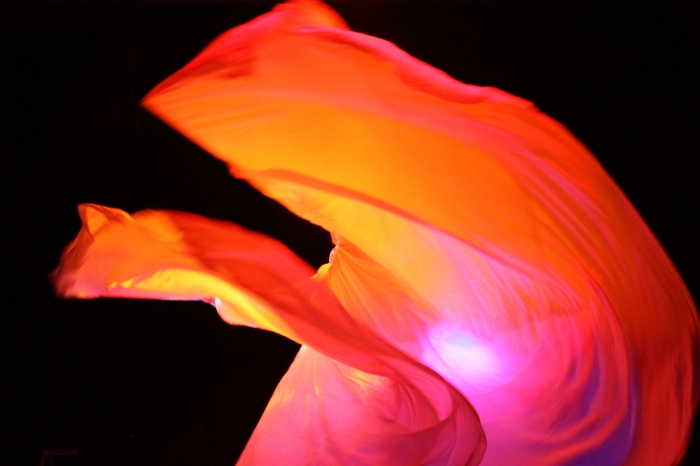 Kerry Laitala will present two works from her Princess Grace Foundation-funded City Luminous Series celebrating the lighting pioneers that gathered a century ago at the fabulous Jewel City, a 635-acre monument to impermanence constructed, and soon after, demolished in San Francisco’s Marina district. These include The City Luminous: Spectacle of Light, which received an audience choice award at the 2015 Crossroads Film Festival presented by SF Cinematheque, and The City Luminous: Electric Salome, for which Laitala filmed Jenny Stulberg performing a dance in tribute to the resplendent Loie Fuller. Both of these performances will feature live sound from Oakland’s experimental music duo extraordinaire Voicehandler, made up of Jacob Felix Heule and Danishta Rivero.

In addition, Laitala will screen the slightly salacious The Kali of Technology, a brief eye-scorcher named for the multi-armed Hindu deity of destruction, power and time. Lastly, 3D manifestations will propel the audience into the screen and beyond the as their retinas get pushed and pulled through the taffy maker of prismatic chromadepth. These works include: Afterimage: A Flicker of Life, sound collaboration Between Kerry Laitala and Wobbly, Terra Incognita and Nine Lives Measured in Mercury with original sound by Neal Johnson, and the rarely-screened Chromatic Revelry.

Kerry Laitala is a media archaeologist who uses analog, digital, and hybrid forms to present traces of forgotten technologies from the distant and recent past. Laitala’s work resides at the crossroads of science, art, history, and her uncanny approach to evolving systems of belief through installation, photography, para-cinema, performance, kinetic sculpture, and single-channel forms. She teaches film at the San Francisco Art Institute.

Her installation Visible Spectres of the Spooks Parade will open at the Exploratorium on October 1st, 2015.

Throughout the month November, Laitala will have her electrophotographs on display at the ATA gallery. This exhibition was funded by the San Francisco Arts Commission.