NOTE TO SELF: PSYCHOSEXUAL FILMS OF NAZLI DİNÇEL ACCOMPANIED BY LINDA SCOBIE 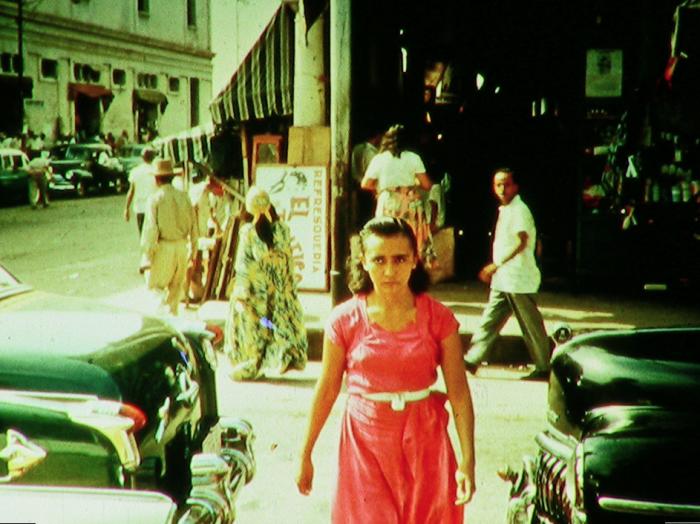 An evening of visceral and provocative handmade films that explore bodies, acts of the solitary, text, language, visual information and personal exposure. Nazlı Dinçel’s work reflects on experiences of disruption. She records the body in context with arousal, immigration, dislocation and desire in juxtaposition with the medium’s material: texture, color and the passing of emulsion. Her use of text as image, language and sound attempts the failure of memory and her own displacement within a western society. This screening will also include two works by local filmmaker Linda Scobie.

Reframe
16mm, 4min, Color, Silent, 24fps, 2009
8 stereoscopic slides taken to the jk-104 optical printer, shot frame by frame, by hand. The slides were found at a thrift store, of Cuba between 1948 and 1950 taken by an army officer. To reclaim his touristic gaze, photographs are fragmented into new frames, reviving the bodies that may have perished by the revolution in 1952.

Leafless
16mm, 8min, Color, Silent, 24fps, 2011
Leafless is an expansion of collections, a hand processed love poem of textures about becoming familiar with a significant other’s body in reservation with its landscape.

Her Silent Seaming
16mm, 10min, Color, Super 16 Image-Sound, 24fps, 2014
A transcription of what I have been told during intimate experiences while separating from my
husband. Sections consist of destroyed originals from Leafless (2011) and motifs of the “feminine”. These decorative objects are re-valued through a controlled act of cutting, with an allusion to synchronization. Direct sound of cuts and hand processing are composed of 26 frame shots. Un-synced, it reveals a hearing of past images, as an act of translation.

Solitary Acts #6
16mm, 11min, Color, Optical Sound, 24fps, 2015
Exacto Knife, 1.5mm Letter Punches, Hammer, Leather Puncher           The filmmaker films her subject in a private act, complicating what could be considered a solitary act. This is a feminist critique of the Oedipal complex. It is not the male child’s desire to have sexual relations with the mother. It is the mother’s desire to be sexually attracted to child-like men. The filmmaker recounts an abortion she had in 2009. If she had the child, he would have turned six in 2015.The aborted child survives and becomes her lover.

VOID (4.INABILITY)
16mm, 4min, Color, Silent, 18fps, 2016
Inability is the first film in the series about human failure. The filmmaker destroys and re-creates a film she was unable to finish in 2013. Filmed at the Sutro Bath ruins in San Francisco and in final domestic spaces occupied with her husband. Film was destroyed in ocean water.